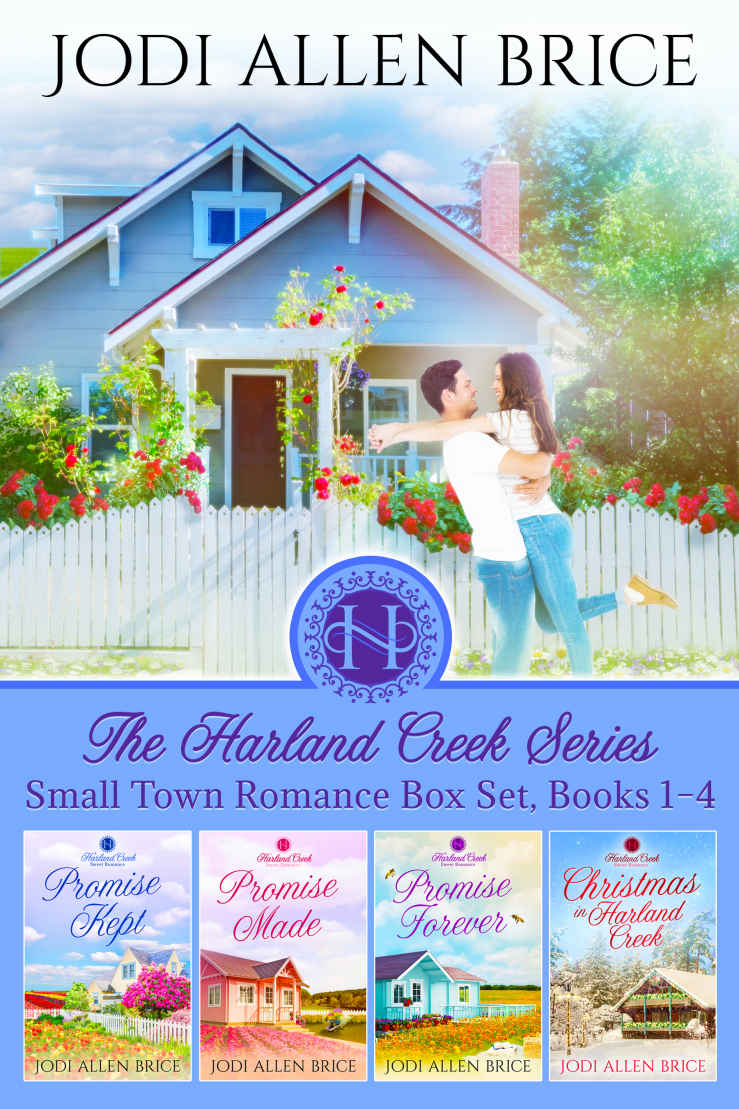 Buy this Book
Books 1 - 4 in the Harland Creek Series

Promise Kept (Book 1
Lying on her job application wasn’t the best way to kick off her fresh start in a small town, but Heather Smith is out of options. She desperately needs the job, or she will soon be without a place to live. Even so,

Now, if she could just figure out why a local farmer keeps casting suspicious glares her way...

Sure, Grayson McCade has his hands full with his farm. That doesn’t change the fact that he considers the residents of Harland Creek family, and he takes time to look out for them all. The second he learns a newcomer has been hired to care for Elizabeth, he worries the kind-hearted old woman is being scammed.

Acting on what he believes to be the best of intentions, he sets out to uncover the truth about Heather’s past. Will the secrets revealed tarnish Heather’s new start before it even begins? Or will Grayson help make Harland Creek the home her heart longs for?

Promise Made (Book 2)
Olivia McCade prefers flowers to people. Other than the occasional thorn poke, she figures plants are far less likely to hurt her.

It was that realization that caused her to leave her nursing career behind and settle into the calming aromas of her flower shop. The plan worked great... until a huge wedding contract put her face to face with the man who broke her heart and shattered her dreams.

Needing someone at her side to help her through this, Olivia turns to Sam Hunter.
But Sam has a secret all his own. For years he’s hidden his true feelings for Olivia. Now, as she looks to him for comfort, Sam must find a way to juggle her fragile heart and his own stirring emotions.

Promise Forever (Book 3)
Growing up in Harland Creek, Gabriela Jackson was the girl all the guys wanted and all the girls wanted to be. Until one tragic night that rocks the entire town and leaves her the object of scorn.
Unable to stay in a place where the entire town hates her, she signs a modeling contract with an elite New York agency just to get away.
She soon discovered the darker side of beauty. After refusing to compromise her morals, she’s labeled as difficult and black balled in the industry. With nowhere else to turn, she returns to Harland Creek. But her homecoming is far from warm.

Incessant gossip behind her back. Now, more than ever, Gabriela is determined to prove only she can define who she is as a person.

Colin Bennet left his scandal-riddled family in England to forge his own respectable path in life. The small town charm of Harland Creek seemed the perfect place to open a book store, and focus on penning his first novel. Turns out that second part would be far easier if American women weren’t falling all over him simply because of his accent.

But there is one who seems uninterested in his worldly charms. An intoxicating beauty with a damaged reputation.

But are they willing to risk it all for a chance at true happiness?
Christmas in Harland Creek (Book 4)

Ever the introverted bookworm, Eliza Ross has read many love stories set to a backdrop of sleigh bells and snow flurries. But turning the pages of her favorite authors’ latest release is the closest she’s ever come to that kind of romance.

Convinced it would be yet another holiday full of itchy Christmas sweaters and family gatherings, Eliza takes a break from her college courses and ventures home to the small town of Harland Creek.

For as long as she can remember, Eliza has had a crush on Jake Denton. Not that he even knew she existed... or so she thought. Yet when a winter storm traps them together, they learn they have more in common than Eliza ever could have imagined.

While the weather outside is frightful, seeing the softer side of Jake is truly delightful. Will the blinding blizzard open their eyes to the magical connection between them?